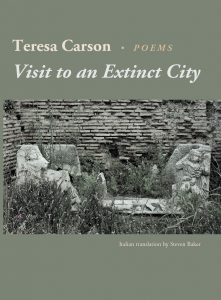 Visit to an Extinct City, first in the series The Argument of Time, reflects on the ruins of Ostia Antica.

About The Argument of Time

The Argument of Time, a five-book series, was triggered by Teresa’s first visit to Ostia Antica in 2014. From the moment she stepped through the Porta Romana, the place had an inexplicable hold on her. Her daylong exploration of the ruins turned into a profound experience: everything in the landscape spoke to her. Back in her then-home in New Jersey, she wrote down the title of all five books in The Argument of Time without any idea of what the actual content of each book would be, except it would be connected to Ostia in some way and that the poems would exist in English and Italian.

Unlike the resort towns of Pompeii and Herculaneum, Ostia was a commercial center that served as the main port for goods coming into Rome from everywhere in the Roman Empire. By the second century a.d. its landscape was a densely packed mix of warehouses, apartment houses, temples (for various religions), baths, toilets, bakeries, and take-out food shops. Its decline from prosperous to extinct happened over a few hundred years; by the eleventh century its marble was being scavenged to build cathedrals throughout Italy. For centuries after Ostia’s abandonment, treasure hunters scoured its ruins for desirable artifacts that ended up in private collections, museums, and even the Vatican. Fortunately for us there is still much to find in Ostia. Today, systematic excavations undertaken by scientists continue to reveal its complexities and marvels.

Two Poems from Visit to an Extinct City

Aeneas lands at the mouth of the Tiber.
Settlement becomes colony.
Jupiter. Juno. Minerva.
The river changes its course.
You keep Rome fed: all grain comes through you.
Invaders take over, leave; pirates sack, leave;
Saracens. Emperors. Popes.
Cartwheels carve ruts into basalt blocks.
Salts rise from the ground, dissolve cement.
Fortunes made and lost; loved ones found and lost.
Medea—Ovid’s only play—disappears without a trace,
but his poems are handed down in many tongues.
Layers of dirt turn into layers of time.
Saint Augustine writes that his mother and he “panted with the mouth of our heart.”
Buildings fall and no one picks them up.
The book once loved no longer opened.
The streets fill with rubble.
Tomorrow will not be like today.
Order slips into order of a different kind.
Marble gravestones—inscriptions intact—reused as drainage lids.
Absence takes over from presence.
Ianuaria, described as a frivolous girl in graffiti, withers to a name derived from first month
of the Roman calendar.
The river dries up.
The empire falls.
The cardo becomes overgrown.
Intrusive roots crack tufa blocks.
Growth turns into decay turns into growth—
back and forth blurs into a single line
until decay wins out.
No one remembers what sacrifice to make to the gods to change unfavorable winds.
No one’s left to sweep the sand.
The upper floor of the insula becomes the ground.
You stick to time-honored ways but have a mind of your own.
The imprint of roads that existed before the Roman grid
becomes hard to find.
Animals burrow. Birds nest.
The connection between carved symbols—branch, stick, and bracelet—no longer clear.
Hands and minds never stop trying to keep things from going away.
Tourists pick up loose tesserae as souvenirs.
You’re seen from a window.
Myths replace history.

Afternoon sun lets nothing hide.
It shines on things as they are,
as if time didn’t exist around them,
as if one moment were as good as the next.
The past stands still beyond its reach.
It cannot bring the dead back to life.
It cannot undo what has been done or not done.

How old old looks up close.
I didn’t expect so much dust,
so much not-there-ness of years past.
Little of the lives lived in this city lasts in its remains.
Details, colors, and forms have returned
to what they were before they were.
Fragments of do not reveal the meaning of.

The knowable has become, quickly or slowly, unknowable.
Real importance reduced to words about importance.
What has happened cannot predict what will.
Nothing in this place not unaltered.
Each layer built over past and under future.
Shovels and screens can’t excavate the heart.
What’s beneath will not be forced to show.

Rome’s harbor town, Ostia Antica, the other well-preserved ancient city in Italy, has long paled beside Pompeii, whose high drama and fiery demise fixed its place in literature and the popular imagination. Not so for the port city on the Tiber. But Teresa Carson’s new Ostian poem comes to us in sixteen cantos, in English and Italian, as welcome as it is rare.

She takes us with her, on a revelatory first visit to the site, preternaturally attuned to all its discomforts and discoveries. Immediately we’re immersed with her amidst a haunted, antique landscape.

Step after step through this long afternoon of a poem, Carson works her alchemy—from broken bricks and crumbling concrete, intently observed—to meditations on the synecdoche of ruins, to contemplations, through her eyes, of loss and decay, on human mortality and the accidents of survival: ‘Layers of dirt turn into layers of time.’

Visit to an Extinct City holds a fresh, personal lens to a seldom-seen, venerable ghost-town and archaeological site. It casts a rueful glance at the folly and profundity of ‘historical reconstruction’—it raises an eyebrow towards guidebooks, tourism and what we think we do when we travel abroad—and with both hands, unexpectedly, it bestows us with a kind of metaphysical vademecum.