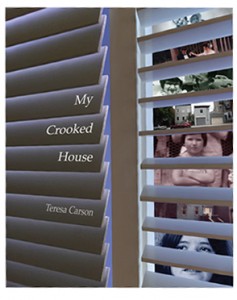 Cat hoarding. Panic attacks. Rigid perfectionism. Carson reconstructs, through a hybrid of received and invented poetic forms, the literal and metaphorical experience of the psychological homesickness that controlled her life until she confronted it in therapy, and thereby opened herself to making a true home with her second husband.

How It Happened Part I

Carson’s search for a house to call home is a personal quest that becomes epic in the classical sense. Beginning with calamity, My Crooked House circles back to origins, then passes through several harrowing perils and challenges on its way toward a more stable, if not perfectly straightened, present. It’s a house full of frank confession, brave excavation, obsessive lists, and hard reckonings. That the individual life, honestly recounted and accounted for, can be so thrillingly spun into gold is only the latest of this poet’s heroic triumphs.
— Jeanne Marie Beaumont

Welcome to My Crooked House, a collection built of crisp, gritty, sometimes experimental, verse that goes two steps beyond confessional poetry (meant in its best sense, i.e., Plath and Berryman) into a raw unburdening of the soul. These poems are not empty words in search of a truth, they are a revelation of truth, constructed day by day, brick by brick, epoch by epoch. The artistry of these poems doesn’t lessen the hurt of the poet/speaker; it changes it. Combined strains of Jersey working class sensibility, tragic inevitability, sheer guts, and inventive exploration of form and craft create a sturdy foundation for Teresa’s house. Wow!
— Danny Shot

My Crooked House is a compelling, brutally honest book of poems, in which Teresa Carson shares with the reader her long and painful journey from trauma and poverty to self-acceptance and true love. Carson’s private experiences are told with accuracy, irony, and inventiveness. Although many of those experiences are sad, time after time her hopefulness and sense of humor transcend that sadness. Toward the end the reader gets to realize that Carson and her crooked house, which “does not need to be straightened out,” are one.
— Rivka Bekerman-Greenberg, Ph.D.

How It Happened Part I

There’s nothing special about her fifteenth pregnancy.
No warning signs prompt her to strike a deal
with Saint Teresa of Avila—
I get a healthy baby; she gets your name—
the way she did with the patron saint of mothers, Anne.

There’s nothing special about her tenth delivery.
Despite the speed of my birth
she gets to East Orange General in time—
unlike what happened with Joe,
born in the back of a cab.

There’s nothing special about me.
I look, feel, smell, eat, cry and shit just like
all her previous newborns.
She doesn’t even need to warm me in the oven
like blue-baby John.

There’s nothing special about how she mothers me—
can’t bear to let me out of her sight.
But, as it’s been for almost twenty years,
she’s pregnant with the next
before I toddle away.

There’s nothing special about this.
She’ll drop me
as soon as number eleven comes home—
the way she dropped Tom who had been, till I showed up,
the apple of her eye for forty months.

John wants to put a metal frame around our house as a way of correcting its lean.
He already put metal beams under the floor in the first-floor kitchen in an attempt to reverse its sagging.
He points out how the straight edge of the new built-in bookcase in the first-floor living room calls attention to the ceiling slant.
The space between wall and frame of the back door changes from 2 ¾ inches at the base to 4 ¼ inches at the top.
The second floor has its own set of problems: Much carpentry had to be done to the kitchen window to square it on the wall and objects that fall on the dining room floor roll from north to south.
This morning he, while sitting in the yard, noticed how the stairs are off-center from the door.
Yes, I say to him, all over there are signs of the leans, slants, settles, sags and cracks underneath.
But, I add, this house has survived a century; it does not need to be straightened out.

When Jeanie left the breakroom—in a huff—
then Ernie humped the table edge which, seconds
earlier, her ass had pressed against,
I laughed along with all the guys.
When Harvey licked the breasts of Miss July
then smacked Dem tits be finger lickin’ good,
I laughed so hard I nearly peed.
When Joe, our local’s president, to strike
a blow against New Jersey Bell, branded
its CEO “a pussy” then—because
he noticed me—explained Don’t get me wrong,
I love pussy but I don’t want to be
one—grin—just fuck as many as I can.
I laughed and laughed until my sides were split.