Elegy for the Floater 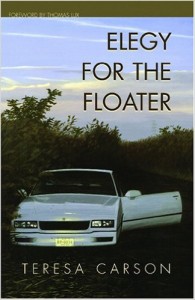 Teresa Carson, the youngest of ten in a blur-collar family, unflinchingly writes about her chaotic past about which she has been taught to keep silent–her mentally ill mother, her enraged and abandoning father, her schizophrenic brother, her rape at fourteen, and her long-term relationship with a married man. It is her brother’s suicide that makes the poet aware of how dangerous shame-filled silence can be, and it is his suicide that pushes her to find her voice. Throughout, the poet chronicles her struggle to come to terms with the range of emotions she feels for her brother–including “bad” ones, such as her relief when he dies–and to understand why he committed suicide.

The Road to the River Blocked

The History of My Nightmares, 1964-Present

Illness and the Poetic Language by Lesley Wheeler
One of the six poerty books featured in this academic essay from “Literature and Medicine,” Spring 2011.

These poems can be harrowing. Ten children, two troubled parents. The speaker’s own excesses and catastrophes (remember: a lot of the time frame of this book is the 1970s!) but always the author’s relentless honesty, clarity, understatement, humor, and skill keep the poems from tipping into the abyss of self-pity…The prime characters…are the mother, father, and the speaker. As the book…reaches its final sequence…its most important character, the speaker’s brother, who died a suicide, by drowning, fully emerges. The strictness of the form…just does its job, which is to give a frame, a tension, something for the powerful emotion to work off of or against, and thus increasing its tensions, its powerful sentiment…By writing this book…Teresa Carson has rescued her family (as much as a family can be rescued) and rescued her brother (as much as the drowned can be rescued). That a book of poems can do this is a miracle. For which I am grateful.
— From the foreword by Tom Lux

The Road to the River Blocked

I heard the owl scream and the crickets cry.
Did not you speak?
Macbeth

The rough X drawn above HARRISON REACH
(Report 2, see Attachment 3, L 10)
marks where the JFK Fire Boat dragged
completely dressed advanced state of decomp
John Doe then placed you in a wastebasket
and cut the chain around your chest—this freed,
as noted on Page 2, the cinder blocks.
Detective H took photos, G bagged coins
found in your pants, while N wrote up the scene.
At 1530 the Essex ME
made her pronouncement. Eighteen years have passed
and chain-link cuts off access to the bank.
NO TRESPASSING warn skull-and-crossboned signs.
I kick the fence. A guard dog barks and barks.

This fence, unforeseen, keeps me from where they laid
human remains while they began their search
for who you were, the way you died, and when.
Please understand how all those years I told myself
you were still waiting at that spot
and when I got there you’d explain the chains,
locks, bridge, river, and torn into several pieces
Medicare card. The list of disconnected facts,
like filings beneath a magnet made of sense,
would settle in neat lines of narrative:
event 13 from ‘86 fit locks
or night in ’45 jump right to torn.
What’s missing from the PM could come out—
I just had to stand on X, you just had to speak.

Lucky for me: your X, because you floated
mid-Passaic, crossed town and county lines.
Their four reports tell same tale, different parts.
I piece together the two-month-long job
of naming cause of death and if foul play
played any part. They quizzed Castillo—he
prescribed your meds—and Ellen from your LKA,
which housed low-income patients. Last,
Detective N sat at his desk and read
his narrative to us—known family.
Although we had a lot of things to say
we had no words of yours that might explain.
The case was soon x’d closed. Eighteen years passed
before we found three notes in your effects.

Not much to go on. Three handwritten notes.
Unstained by coffee. Never sent. Not really
suicide notes. Written some time before.
Responses to unknown-to-me events.
One to our parents—here called Sam & Joan—
and one to each of two brothers. Three please
accept my apologies (for unspecified
disturbances in roles of son, housemate,
employee of our brother’s painting business).
Three promises to improve my behavior if
I return home. Three hope you understand,
sincerely, Joseph Lamphier—which
sounds like too formal a way to end notes meant
to patch things up after a family fight.

Let’s say you had a fight with Brother K
who bitched about the crap piled in your room
and demanded that you fix things now, his way.
You rambled on about the rights of man.
The dispute traveled downstairs to the kitchen
where Sam, whose short fuse welcomed any match,
joined in and tagged you nut case, son-of-bitch,
disgrace to family and wished you out.
Then Brother V showed up, spat his two cents—
his customers complained about your smell.
Joan clutched her beads and came to your defense
(you needed a nap, a piece of fruit, or tea).
Yet don’t be fooled, it may not mean a thing,
my version of this could-have-happened scene.

That scene was someone else’s, let’s take one
of mine: on Christmas Eve in ‘82,
locked ward in Meadowview. You don’t want me
to see your room. You warn don’t come again.
I bring a brown-bag full of gifts from Mom—
wool socks, new underwear, a flannel shirt,
and half-a-dozen navel oranges
which you pick up but quickly throw back down.
How’re things? Good. You chain smoke Camels lit
by matches I possess and, per Nurse T,
patients can’t have. While others mutter and pace,
you act as if we’re sitting in Mom’s kitchen.
The door near-shut I turn around and see
you tearing apart an orange with your teeth.

Trying to tear apart their open-and-shut
C.O.D.: drowning, Manner: suicide
has brought me to this broken-bottle lot.
Attachment 3 insists the riverbank
bends north one-sixteenth of white space past fence;
exact location of recovery
fixed there, not close enough for me to see,
and after all these years the road—unbroken,
no-name line on map—used by the cops
responding to body found floating ends
too soon. No sign of other ways back in.
Dear Joe, what now? I learned three notes and four
reports and my remembered-you, by heart,
and still your X remains unreachable.

The History of My Nightmares, 1964-Present

Seven out of nine rooms once used
as bedrooms—one for Mom, for Pop,
the oldest boy, the oldest girl,
and three where kids were doubled up.
Now all but three were empty. Tom claimed
the one with locks. Pop, who stayed
at his girlfriend’s place most weekends,
kept the small room off the kitchen.
One hall, two rooms away from his:
Mom’s bed. I, age ten, slept next to her,
as I’d done since outgrowing my crib.
But there were no more afternoons I cried
when Pop and Mom went in her room and pushed
the dresser against the door to keep me out.

2. What we did on weekend nights when Pop wasn’t
home

We didn’t own a TV
or radio. We didn’t join
the neighbors on the stoop
but three floors up I heard
Mrs. Bybel’s gruff voice
telling jokes that made
adults laugh but Mom frown.
I wanted to laugh too.
We said rosaries; the beads clicked
through Mom’s fingers.
Prayers blurred to non-words.
I knelt on the room’s east side, she on its west.
Tom stayed behind his closed door. I hoped
my sisters or Joe would show for Sunday dinner.

Mom got up from her rocking chair,
said time for Tweety-bird and me
to go to bed then left the room.
If others were there I lagged a minute
pretending not to care but that meant
I’d have to hurry when halfway down
the hall and out of their sight.
She undressed to her slip. I climbed
in first—my place between wall
and her. She shut the door, turned out
the light, lay down a body-space away.
I inched over and snuggled into her side.
She raised her arm and I pressed my face
into breast. No words ever spoken.

4. My collection of nightmares from those years

Rats chewed my toes. Disembodied hands
came up from under the bed and pawed
my stomach. A man on the landing
slipped his hand in the broken panel
and opened the lock. My sister screamed
and screamed. I found dead kittens
in the back of the closet, moldy loaves
in the punched wall, and blood on my pajamas.
The nightmare I’d have for the next 30 years
began: I wake, can’t breathe,
something evil at the foot of my bed,
must get away, but paralyzed.
My fingers pull me across the floor,
those deadly hands seconds behind my neck.

I couldn’t fall asleep—
even in my own bedroom in my own
house—unless there was a light, a bright
light, on in the room.
When staying at hotels or someone’s
home, I turned on every light and checked
every corner, at least twice,
before laying down.
And never let myself deep-sleep—
had to stay prepared in case something
happened. What if a killer broke in
and I wasn’t awake enough to know?
It’s different now: 111 Belmont torn down,
Mom dead, and I sleep soundly next to John.

He jumped up, turned on TV,
said nothing. He’d forgotten I was there.

I used a kitchen towel
to wipe blood off my thighs.

From behind I put my arms
around his seated form.

The intercom buzzed. His wife headed up.
He barked: Get out, take the stairs, use the back door.

I stuffed my underpants
deep in a trash can,
wandered uptown
to my sister’s place.
I showered.
No one was home.